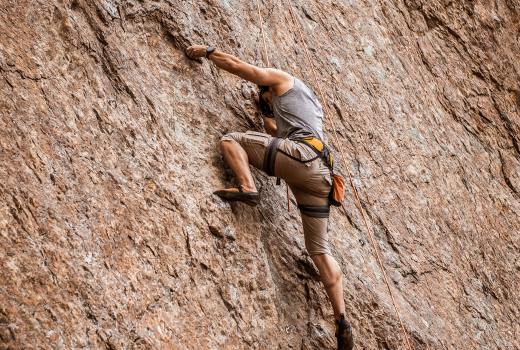 The rock loomed above Martin in the early morning sun, a vertical gray crag. After months of distractions he was finally upon it. The dark crevices felt warm beneath his powdered hands. His fingers curled into the holds, steadying his body, feet reaching for the slight ledges that jutted from the ragged rockface.

Climbing purified Martin’s mind. Thoughts of his ailing mother, his distracted wife, his teenage daughters, his precarious job – all fell away. In the moment there was only his grip upon the rock: the unyielding fact of it beneath his flesh, ascent his singular goal. Nothing else mattered when he was climbing, only the inching upwards, the pressure and push to scale the wall or the rock or the mountain. To daydream, to fret, to relax meant to fall.

Rachel had never shared his passion, but she’d accepted his disappearances on weekends and the occasional evening. She’d argued with him about the free solo documentary, but he’d imagined the sense of ultimate freedom, of exhilaration, that such feats must generate, and since watching the movie he’d been unable to shake his yearning. He’d always climbed with ropes – strapped into his harness, double-checking his safety gear – but not today.

At the start of his climb he’d felt a shiver of awe, but also excitement, looking up at the towering crest. He’d spent some time running his hands over the rock and contemplating his route. He felt light in his t-shirt, no dangling straps or clanging carabiners. Today he would push himself beyond his usual limits. He would taste the liberation of the free soloists.

Martin proceeded steadily, careful yet in the zone, testing footholds and feeling for cracks. He made slow but sure progress, looking neither down nor up but at the next portion of rock before him. His mind cleared; the rest of life drained away. There was only the pump of his blood and the strain of his muscles, a light breeze at his back and the faint fluting of birdsong in the background.

The crest of the crag remained far above him when Martin felt his arms begin to tire. Despite climbing since boyhood, middle age was taking its inevitable toll; his strength was not what it used to be. A ripple of panic intruded on his concentration and a cold sweat broke out across his brow. Reaching for the next hold with his toe, his leg began to scrabble against the rock, then seized up, and Martin felt himself begin to slip.

His sense of willpower and liberation flipped to full-bore fear as thoughts came rushing back: What would his girls do if they lost their father? How would his family cope with the trauma of sudden loss? How could he have been so cavalier with his safety? All in pursuit of an adrenaline rush. How could he ever have thought that might be the pinnacle of experience, when so many things were more important?

These things and more flashed though Martin’s mind as he came off the rock. His body scratched and bumped against the sharp surface; as he fell nine feet to the ground, he felt somehow absolved by the scrapes and bruises. They would tether him to his renewed perspective and, next time he came to climb the crag, he could go farther, knowing that he had brought his ropes.

Zach Sager is an attorney who lives in Delaware with his Boston Terrier, Heff. He writes, and climbs, in his spare time. This is his first published piece of fiction.