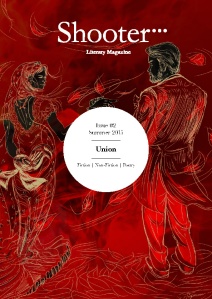 This spring, notions of union fired up headlines and households across the UK.

The most unexpected result of the General Election turned out to be the number of seats scooped by the Scottish National Party, causing Scotland’s union with the rest of the UK – despite last year’s referendum in favour of remaining part of it – to look shaky.

The election did iron out one other rumpled union, the coalition between the Conservative Party and Liberal Democrats, by returning the former to sole leadership in parliament. And within the next year or so, David Cameron has promised a referendum on the UK’s membership of the European Union.

Despite these fertile circumstances, writers submitting to Issue 2 of Shooter chose to dig into personal rather than political unions. Given that conflict is fundamental to good storytelling, they preferred to contemplate ways in which love, marriage and other relationships fracture, more than the forces that bind them. The best stories and poetry – those that ended up in this issue – conveyed the complexity of human relationships by interweaving elements of both, painting in shades of grey instead of black or white. (Perhaps our vibrant cover, by J Spencer, makes up for this monochromatic metaphor.)

The opening story by Max Sydney Smith, “Tooth and Nail,” contemplates romantic connections and where they might lead in just such a philosophical fashion. Ambivalence about love and sex underscores much of the issue, from Nicki Heinen’s would-be bride in her poem “Lace” to Kate O’Brien’s non-fiction piece “Tinder and the City,” an eye-opening account of her experiences as a British girl in New York discovering the dating phenomenon that is Tinder.

The ties between parent and child produced some of the issue’s most poignant work, including poems of filial bereavement by Raymond Antrobus and a monologue-style story, “Richard and Me,” by Atar Hadari, who lightens the load of his laundrywoman by endowing her with a Richard Gere obsession.

More unusual unions, too, provided rich sources of inspiration. Neil C Chapman’s passionate meditation on perfume, “Through Smoke,” gives tremendous insight into the connections between scent and memory, fragrance and identity, as well as the increasing (and dismaying) commercialisation of the perfume industry. He rounds off his essay with a mesmerising section on the significance of scent in Japan, showing how deeply the sense of smell is rooted in Eastern culture.

Among the fiction, Jim Courter probes interactions between new residents and their neighbours to comic effect in “The Number of the House.” Julianne Pachico explores the tense relationship between a prisoner and his Colombian captors in “Lemon Pie,” in which a kidnapped teacher struggles to preserve the perilously thin link between mind and reality. Stephen Koster closes the issue with a short shot of literary satire, as a writer is forced to contemplate parallels with his peers in “You Should Read His Stuff.”

At the London Short Story Festival in June, I happened to spot some of Shooter’s authors in the pages of other publications. Pachico has not one but two stories in Salt Publishing’s Best British Short Stories 2015 anthology, alongside literary luminaries like Helen Simpson and Hilary Mantel. At a packed-out reading of stories from Unthology 7, I discovered a piece by Barney Walsh, whose tale of hormone-fuelled adolescent attraction, “First Love and Stuff,” features one of the strongest, most emotionally engaging voices in this issue.

Apart from national politics, there was at least one other election this spring. Early supporters of Shooter turned out or, at least, logged on to vote for us as Best Magazine in the Saboteur Awards. It was heartening to be nominated after just one issue alongside more established journals like Bare Fiction and Lighthouse, which ultimately (and deservedly) won.

Lighthouse first published several of the pieces that appeared in Best British Short Stories 2015. If a vote is a kind of bet – choosing something based on the available evidence – I’d wager that a few stories by Shooter authors might show up in next year’s anthology, too.